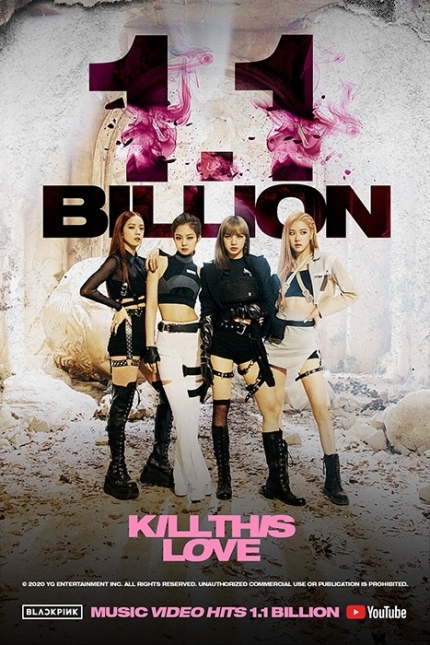 According to YG Entertainment on November 10, BLACKPINK’s ‘Kill This Love’ MV surpassed 1.1B views on YouTube yesterday as of 10:58 PM.

As a result, BLACKPINK became the first K-Pop group to hold two MVs with over 1.1B views. BLACKPINK’s mega-hit song ‘DDU-DU DDU-DU’ has surpassed 1.1B views prior to ‘Kill THIs Love’ and is currently headed towards 1.4B views.

However, at this rate, it is only a matter of time before ‘Kill This Love’ catches up to ‘DDU-DU DDU-DU’, which has the ‘Most viewed MV by a K-Pop group’ title.

In fact, the ‘Kill This Love’ MV surpassed 1.1B views in 69 days since they reached 1B views. Although a year and 6 months have passed since its release on YouTube, the video is adding one hundred million views every two months, which is surprising.

‘Kill This Love’, released on April 2019, is a popular song with fierce lead brass sounds and epic drums. The point moves which made the viewers look as if they were shooting a shotgun and their catchy point moves emphasized BLACKPINK’s girl-crush charms and captivated the global music fans.

They also achieved noticeable success in music charts. ‘Kill This Love’ was ranked at no. 24 and at no. 41 on the US Billboard 200 and Hot 100 charts respectively, setting the best K-Pop girl group record at the time. The song also became the first K-Pop girl group release to top the US iTunes Song chart.

With their success through ‘Kill This Love’, BLACKPINK established themselves as an artist group with tremendous influence and popularity in the major Pop market.

Based on their popularity, BLACKPINK successfully completed their world tour consisted of 32 concerts held in 23 cities of 4 different continents, released new songs consecutively this year, and raised the status of K-Pop in the global music market once again by proudly standing next to global Pop stars.

BLACKPINK’s official debut album ‘THE ALBUM’ was ranked at no. 2 on the US Billboard and UK’s Official Albums chart, renewing the best K-Pop girl group record once again.

The title song ‘Lovesick Girls’ from their album was ranked at no. 3 on the Global Top 50 chart of Spotify and topped the Global YouTube Song Top 100 chart for 2 consecutive weeks, while their song ‘Ice Cream’ reached no. 13 on the US Billboard Hot 100 and successfully charted in for 8 consecutive weeks.

BLACKPINK’s YouTube channel, which holds 22 videos with over 100M views including 3 MVs with over 1B views, has currently surpassed 52.8M subscribers, maintaining the group’s position as the second most subscribed artist in the world.