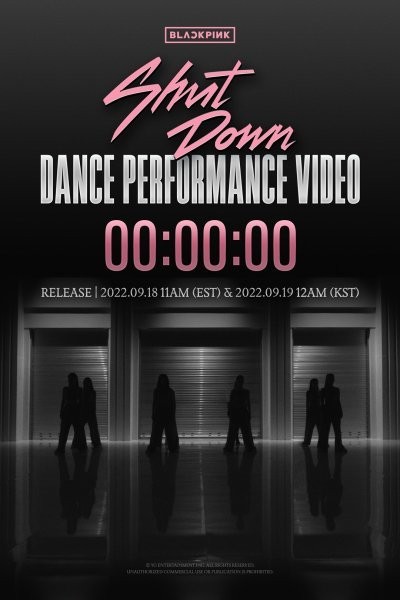 YG Entertainment said on the 18th that they will unveil BLACKPINK’s ‘Shut Down’ Dance Performance Video at 12:00AM of the 19th. Expectations are running high among BLACKPINK’s fans as the full version of the performance is being released for the first time, apart from what was shown in the music video.

The poster was first unveiled the day before. It showed silhouettes of the members that gave off an unrivaled aura in a space that seemed like the music video set.

‘Shut Down’ is a song that put together Paganini’s ‘La Campanella’ and trendy hip-hop beats. World renowned choreographers Kiel Tutin and Taryn Cheng, Lee Jung, Kyle Hanagami from YGX worked together to create the choreography.

BLACKPINK is expected to show off their signature swag and unrivaled performance skills. YG said they didn’t shoot it in the original practice-room setting, but somewhere else to mark clear member’s various charms and points of the choreography.

As 13 of BLACKPINK’s 33 videos with more than 100 million views are dance practice videos, YG expects the ‘Shut Down’ dance performance clip to gain enormous popularity too.

Meanwhile, BLACKPINK release their 2nd full album ‘BORN PINK’ at 1pm of the 16th. The album also topped the first place on iTunes Album Chart in 54 countries including the U.S. and UK. They also topped the Apple Music Album Chart in 61 countries. Not only the title-song, but their track-songs are also topping not only domestic music charts, but charts in Japan and China as well.