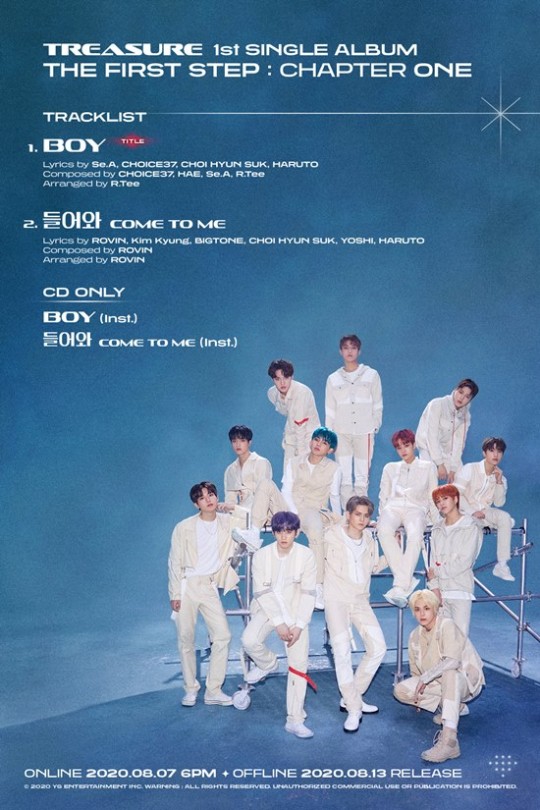 On July 30 at 9 AM, YG Entertainment revealed a track list poster unveiling the titles and credits of TREASURE’s first single album, ‘THE FIRST STEP : CHAPTER ONE’, raising anticipation on the group’s upcoming debut.

According to the track list, ‘THE FIRST STEP : CHAPTER ONE’ is composed of 2 tracks including the title song ‘BOY’ and ‘COME TO ME’. The instrumental versions of the two tracks were also included, exclusively on physical copies.

The full support by in-house producers of YG also grabbed the people’s attention. In addition to producer R.Tee from The Black Label, talented producers such as Se.A, CHOICE37, HAE participated in the title song, ‘BOY’. The song ‘COME TO ME’ was produced by ROVIN, while Kim Kyung and BIGTONE participated in writing the lyrics of the song.

Furthermore, rappers of TREASURE including CHOI HYUN SUK, YOSHI, and HARUTO participated in the rap making of both tracks, which added more meaning. CHOI HYUN SUK has previously become a hot topic by participating in the making of the background music for their concept teaser clip, which grabbed the fans’ ears with its catchy sounds. As the members have participated in the creative process of their first debut album, they hint their musical capacities and their growth potential.

‘THE FIRST STEP : CHAPTER ONE’ is an album title that refers to TREASURE’s ‘first step’, which makes the people look forward to the group’s beginning and their upcoming stories. The short yet impactful title of their debut song, ‘BOY’, is stimulating the fans’ imagination on the strongness and fresh boyish charms TREASURE will present in the future.

TREASURE, confirmed to make debut on August 7, is a group composed of members CHOI HYUN SUK, JIHOON, YOSHI, JUNKYU, MASHIHO, YOON JAE HYUK, ASAHI, BANG YE DAM, DOYOUNG, HARUTO, PARK JEONG WOO, and SO JUNG HWAN. They are a major rookie group being presented by YG in 4 years since BLACKPINK and are receiving global attention as YG’s next generation boy group that will follow BIGBANG, WINNER, and iKON.

TREASURE will release all tracks from their first-ever single album ‘THE FIRST STEP : CHAPTER ONE’ next month on the 7th at 6 PM and begin their actual activities. Their album, currently available for pre-order through YG SELECT and major distribution channels, will be available through online and offline retailers nationwide starting from August 13. 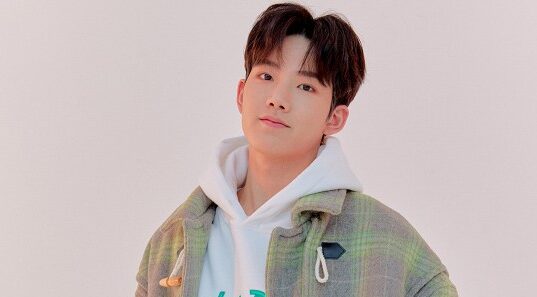