[스포츠조선닷컴=정안지 기자] As the 7 trainees from group J have been revealed, all 29 members of the treasure box have unveiled.

Today (8th) at 11 AM, YG Entertainment revealed the 7 trainees of group J from ‘YG Treasure Box’ through their official blog and VLIVE (V app),

What differentiates trainees of group J from groups A, B, and C is that they are all Japanese. They are trainees of ‘YG JAPAN’, YG’s branch located in Japan.

Group J, named after the J from YG JAPAN are composed of KEITA who’s challenging a survival program for the first time, HARUTO, YOSHINORI, ASAHI, MAHIRO, and KOTARO.

They introduced themselves with uniqueness while revealing their charms and skills through performance clips.

This group had outstanding visuals and vibes as YG has previously stated to take appearances into account.

YG Entertainment has revealed all 29 trainees participating in ‘YG Treasure Box’ for the last 4 days from the 5th, gathering the fans’ attention.

They will open individual VLIVE channels for all 29 trainees tomorrow (9th), where various clips that will not be available through the actual broadcast will be sequentially uploaded.

‘YG Treasure Box’, the program receiving the spotlight prior to its premiere will first broadcast on the 16th, marking the start of a fierce survival competition. 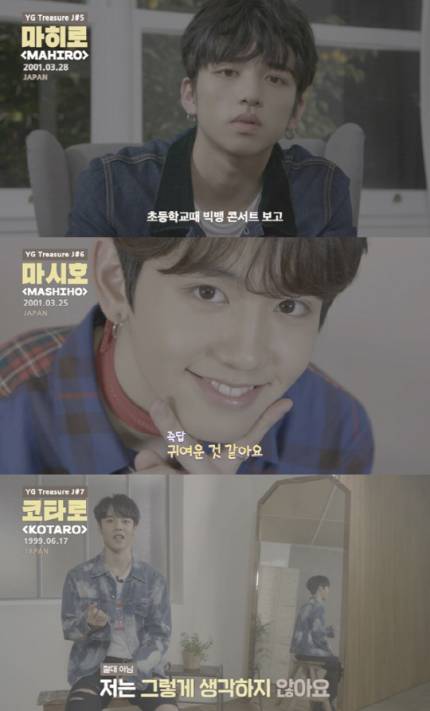 KEITA who’s known to have a positive personality stated, “It’s my first challenge on a survival. I will not lose” and continued, “I would like to become an artist who presents positivity”.

KEITH himself chose his ‘pretty hips’ as his strength, making the people burst into laughter.

HE later presented his own rap and vocal skills on Jay Park, Simon Dominic, Loco, and Gray’s ‘Upside Down’ through the performance clip.

He also revealed masculine facial expressions and fluent Korean in addition to the interview, presenting high levels of completion in various fields.

HARUTO who think’s CHOI HYUN SUK from YG Treasure A#1 looks handsome revealed his confidence on his visuals by stating, “I look better”.

He continued, “My long legs and eyes are my charm points” and added, “I would like to be a trendy rapper. I hope to make debut before I turn 20”.

HARUTO performed Rich Brian’s ‘History’ in his own style, presenting his outstanding rap skills and flow through the performance clip.

YOSHINORI who took the audition for YG JAPAN when he was a freshman due to his love for Korean music stated, “Rappers who express power through the lyrics are cool” and added, “I also want to be a rapper that gives strength to the people. I do what I decide”.

ASAHI who’s been studying composing music himself since middle school revealed his will to made debut by stating, “I want to move people’s hearts with my own song”.

ASAHI chose ‘work of art’ as his favorite Korean word. He revealed his artistic aspect by stating that the reason is because he wants to create a lot of them.

He performed Sam Smith’s ‘Lay Me Down’ in the following clip, presenting his mellow vocals.

MAHIRO with ‘charming brown eyes’ stated, “I wanted to be on a big stage after watching BIGBANG’s concert in elementary school” and added, “I want to be YG’s NO. 1 who’s good at everything”, leaving a strong impression.

On the following performance clip, MAHIRO presented his powerful and charming vocals by performing One Direction’s ‘Drag Me Down’.

MASHIHO who presented excellent Korean was asked the question how he thinks of his own visuals. He answered, “I think I’m cute” and added, “Am I not?”, making the scene delightful. He also revealed his desperation by stating, “I want to become an artist who gives joy. I want to make debut in YG”.

MASHIO performed the well-known song ‘Want to Want Me’ by Jason Derulo, in his unique color.

‘YG Treasure Box’ is a survival program to select members for YG’s new boy group being presented in 5 years, following BIGBANG, WINNER, and iKON. A fierce competition is expected as representative YANG has stated, “We are planning on selecting 5 members out of 29 trainees”. Unlike pre-existing debut survival programs, YG is planning to present the progress of the group’s creation in detail by revealing YG’s actual music producing know-hows and internal system accumulated for the past 22 years.

‘YG Treasure Box’ will be composed of 10 episodes. The program will pre-release on the 16th at 10 PM through VLIVE (V App) and premiere on the same night at 12 AM through JTBC2 and YouTube.