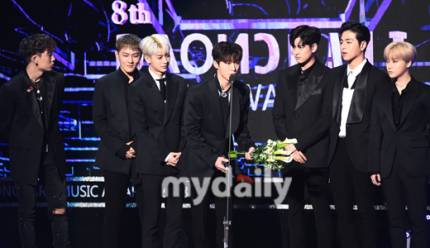 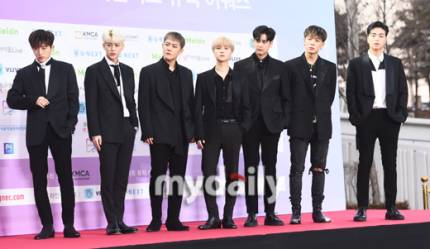 That is, the group swept award trophies with the title song ‘LOVE SCENARIO’ from their 2nd album ‘RETURN’, released last year on January. The song received nationwide support and created waves with its catchy melodies. The song was loved by people of all generations, even kindergarten and elementary school children. The song is still ranked within the top 100 on major music charts although a year has passed since the song was released.

iKON has already established themselves as ‘idols who receive the grand award’ by receiving numerous awards on various awards ceremonies, but the group grabbed the people’s attention with their attitude of looking back on the special meaning of every trophy they have ever received.

iKON, who got on stage multiple times, shared a sincere award acceptance speech. They stated, “After a long vacancy, we made comeback with ‘LOVE SCENARIO’, and were carrying pressure on our shoulders. We’re very happy that our song was selected as the most loved song of January 2019. It’s all thanks to our iKONIC (fan club)”.

Then the group reminded themselves of their first intent. They promised, “We’ll become iKON who stay humble, grateful, and improving without settling for what we have”.

They continued, “We would also like to thank the young children. We’re happy, proud, and honored to exist in their memories, only if it’s just for a while”, sharing their thoughts on becoming the ‘elementary school presidents’.

iKON gave credit on their success to the fans, showing their special affections. The members revealed, “’LOVE SCENARIO’ was created after we were inspired by you. iKONIC is our source of every award we receive. Thank you so much”.

Even when they received the ‘Record Production of the Year’ trophy, they credited the fans. They emphasized, “Every award we receive is that of iKONIC’s, and our staff members who created us”.

iKON added, “There have been trial and error until the album was released, and sometimes we fell. But we did not stop there and kept on going forward with a positive attitude, with the support of our staff members and our fans”.