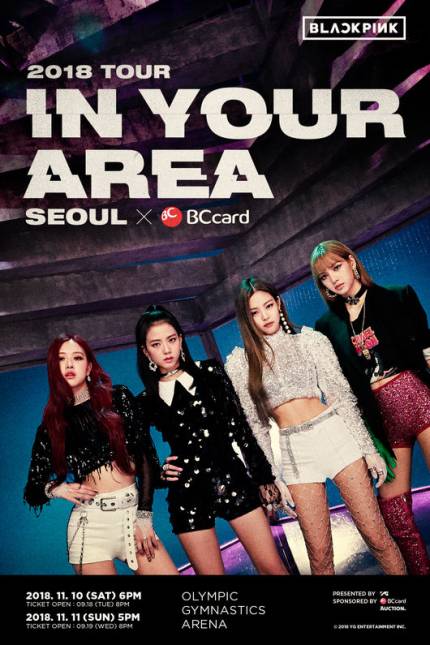 [OSEN=김은애 기자] BLACKPINK will hold their first ever concert in Seoul on November, in KSPO DOME (Olympic Gymnastics Arena).

Today (12th) at 10 AM, YG Entertainment revealed the spot video and poster for BLACKPINK’s Seoul concert through their official blog (www.yg-life.com).

The revealed spot video showed certain scenes from MVs including ‘WHISTLE’, ‘PLAYING WITH FIRE’, ‘AS IF IT’S YOUR LAST’, and ‘DDU-DU DDU-DU’ along with BLACKPINK’s official light sticks, raising curiosities of viewers. The signature phrase ‘IN YOUR AREA’ and the message ‘SEE YOU SOON IN SEOUL’ then appeared to notify the opening of BLACKPINK’s concert in Seoul.

On November 10 (Sat) at 6 PM and the 11th (Sunday) at 5 PM, BLACKPINK will hold the BLACKPINK 2018 TOUR [IN YOUR AREA] SEOUL X BC CARD’ in KSPO DOME (Olympic Gymnastics Arena) and meet their fans in Korea.

The members of BLACKPINK are doing their best to prepare for the upcoming concert and are even putting in their own ideas. The title ‘IN YOU AREA’ was also named by the members, as they are preparing for the event with passion and will.

Their concert in Seoul will be the first official meeting with the fans after BLACKPINK’s official fan club ‘blink’ was formed, which is also raising expectations of fans.

Tickets for BLACKPINK’s ‘first ever concert in Seoul’ can be purchased through Auction Ticket. The fan club pre-sales will begin on the 14th, while general ticketing will take place on the 18th and 19th.