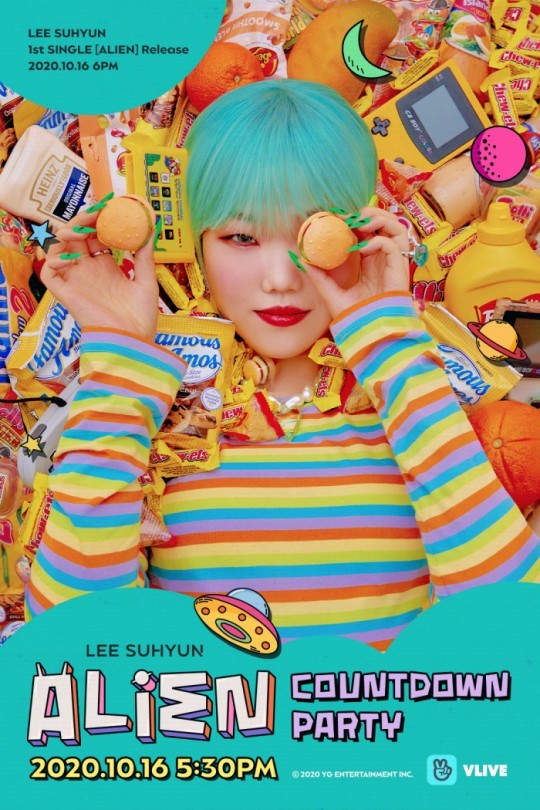 [매일경제 스타투데이=박세연 기자] AKMU LEE SU HYUN will connect with her global fans through a special LAN party on the 16th, prior to the release of her debut solo single.

LEE SU HYUN’s ‘ALIEN’ COUNTDOWN PARTY will begin on October 16 at 5:30 PM through Naver V LIVE, 30 minutes prior to the release of her album.

The party will be held at a space reflecting the song’s ‘MV’ set concept. LEE SU HYUN will introduce her song ‘ALIEN’, share talks on the behind stories regarding the MV, and decorating postcards for the fans.

LEE SU HYUN grabbed the viewers’ attention with style transformation. Her glamorous and mystic mint-colored hair and contrasting red lips noticed LEE SU HYUN’s differentiated charms from what she has shown through AKMU. The jolly and cute entertainment equipment and props surrounding her also raised curiosities on the song ‘ALIEN’.

‘ALIEN’ is the upcoming debut solo single by LEE SU HYUN, being released in 6 years since her official debut. AKMU LEE CHAN HYUN was credited as the writer and composer of the song, as well as taking the role as the main producer, making the people look forward to the birth of another masterpiece.

LEE SU HYUN appeared on SBS ‘Survival Audition K-Pop Star Season 2’ back in 2012, gathering the attention of the public. After making official debut in YG in 2014, AKMU became hugely popular with their unrivaled emotional touches and musical capabilities, establishing themselves as ‘music chart influencers’ you trust and listen to.

The title track ‘How Can I Love the Heartbreak, You’re the One I Love’ from their 3rd album ‘Sailing’ released last year on September achieved an ‘all-kill’ on Korean music charts at the time, and is still ranked in the Top 20 of Melon, although it has been over a year since its release. Everything about AKMU was Good, from their Live Singing to their Funny Jokes YG, AKMU LEE SU HYUN Will Be Making Comeback on the 16th… First Solo Debut in 6 Years Since Debut