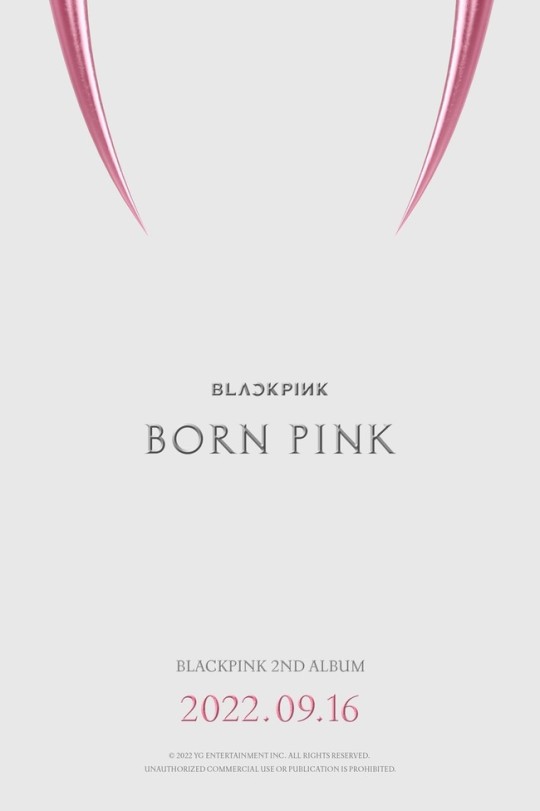 [앳스타일=박승현 기자] BLACKPINK’s 2nd full album ‘BORN PINK’ will be released on September 16th. The release comes right after the release of their pre-release single ‘Pink Venom’, showing how the group plans on riding on their comeback popularity.

YG Entertainment uploaded the teaser image of BLACKPINK’s second full album ‘BORN PINK’ on their official social media on the 10th. The poster showed the album logo shining brightly in gold on a light gray background, along with the canine tooth artwork, and the date ‘2022.09.16.’.

YG said “The album title ‘BORN PINK’ portrays BLACKPINK’s confidence and self-esteem for being born different. Please look forward to an album full of music that lives up to the reputation of the group and their unrivaled presence”.

Although detailed information such as the title-song and album track list hasn’t been disclosed just yet, global fans are already in a festive mood as information on the pre-release song in August, the full-length album in September, and the outline of the world tour in October has been dropped.

YG had announced the first schedule of the group’s world tour which will hold about 1.5 million people the previous day, and excited fans by saying, “We designed and planned stadium tours as well along with Arena tours”.

This shows how BLACKPINK members and YG have been working hard to realize this plan. YG said other special projects are prepared apart from the two music videos that were made with the highest production cost ever, raising expectations of global fans.