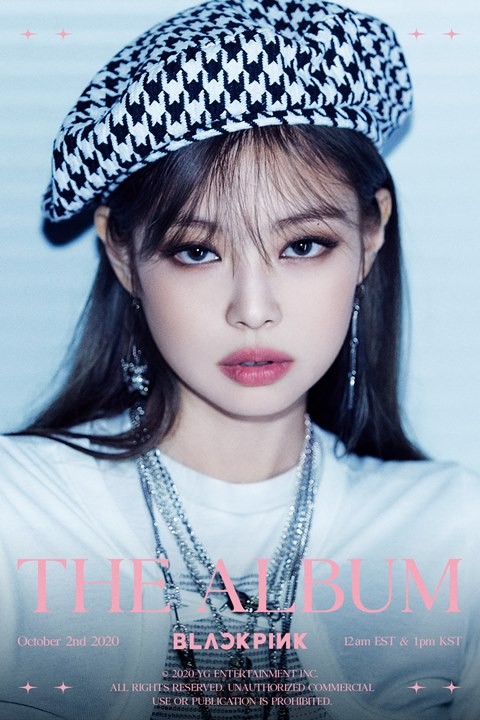 On September 23 at 9 AM, YG Entertainment revealed JENNIE’s individual member poster for BLACKPINK’s official debut album, ‘THE ALBUM’, through their official blog.

In the poster, JENNIE wore a beret hat and point accessories with her long black hair, revealing her luxurious looks. Her glamorous yet pure looks emitted a mystic vibe.

On September 22, JISOO also revealed exceptional styling, different from her usual image. As individual member posters are being revealed day by day, the people are raising curiosities and anticipation on the concept they will show through their official debut album.

BLACKPINK will release their official debut album ‘THE ALBUM’ on October 2, in 4 years since making debut. Since they will be targeting the global market, the album will be released at 12 AM in US Eastern Time, and at 1 PM on the same day in Korean Standard Time.

Detailed information on the album is still in veil, but BLACKPINK has successfully targeted the global market through their pre-release singles ‘How You Like That’ and ‘Ice Cream’.

‘How You Like That’ received an award at the US MTV Video Music Awards and has been selected as ‘The Best Song of the Summer’ by YouTube. Furthermore, the song ‘Ice Cream’ with Selena Gomez has been ranked at no. 13 on the US Billboard ‘Hot 100’, renewing their own best K-Pop girl group record.

The two songs showed BLACKPINK’s contrasting charms, adding more meaning to their success. ‘How You Like That’ presented BLACKPINK’s unique girl-crush and fierce performances based on Hip-hop music, while ‘Ice Cream’ was a Pop genre song with fresh and cute concepts, which BLACKPINK has challenged for the first time.

With both pre-release singles being popular, BLACKPINK’s album pre-orders numbers are also unusual. The 1st pre-order volume for ‘THE ALBUM’ were accumulated to 800 thousand copies in just 6 days. The figure was accumulated with a month left until the official release of the album, so actual sales are expected to increase even more.

Meanwhile, physical copies of BLACKPINK’s ‘THE ALBUM’ will be released on October 6 through nationwide retailers online and offline. Furthermore, the group’s Netflix original documentary titled ‘BLACKPINK: Light Up the Sky’ will premiere on October 14.