‘YG TREASURE BOX’, The Most Unexpected Moments BEST3…Who is NEXT? 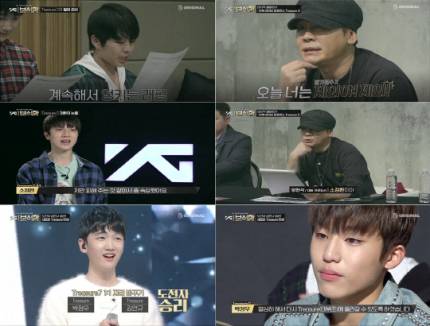 [스포츠조선=조윤선 기자] As YG TREASURE BOX, airing on Naver V LIVE (V App) progresses halfway through the entire competition process, the show is gaining popularity with its unexpected survival results. Before feeling the joy of being a member of Treasure 7, PARK JEONG WOO had to drop out of the group due to the results of the 1:1 position swap mission challenge with KIM YEON GYU, raising the tension of the show.

In the midst of the breathtaking survival competitions, we selected the most unexpected moments from ‘YG TREASURE BOX’ aired during the past 4 weeks that made people shocked, happy, and sad. People are already looking forward to who will be the next trainee to bring unexpected results on the 5th episode of ‘YG TREASURE BOX’ airing today.

The treasure that stood out the most on the first and second episode of ‘YG TREASURE BOX’ was 14-year old JUNG JUNHYUK. He was also the one that gave the most unexpected impression on not only the Treasure Makers, but also other treasures. On the monthly evaluations aired through the 2nd episode of ‘YG TREASURE BOX’, he was placed at no. 1 among trainees of group A including BANG YE DAM, the ‘trainee with the longest training period’ and skilled rapper CHOI HYUN SUK. BANG YE DAM was placed at no. 4, CHOI HYUN SUK at no. 11, LEE BYUNG GON at no. 17, and KIM SEUNG HOON was at no. 19, all members placed at the lower ranks.

JUNG JUNHYUK made representative producer YANG HYUN SUK smile with his confident rap in front of CHOI HYUN SUK. However, he could not present his skills during the final monthly evaluations, failing to become part of the debut group. His failure to enter the debut group was the first unexpected event.

▶’The youngest trainee in tears’ SO JUNGHWAN made it! The unexpected result by the hard worker with visuals!

The most shocking trainee after the first debut group announcement was 14-year old SO JUNGHWAN. Most trainees mentioned him as “the most unexpected”. That is, he has been reviewed by YANG HYUN SUK that he still “feels like an amateur”. He was placed at no. 22 on the first monthly evaluations which was the lower ranks, while also shedding tears when the trainer scolded him due to his unstable vocals while preparing for the group performance of group C.

However, SO JUNGHWAN shed tears and sweat more than anyone, dedicating himself to practice. He eventually became YANG HYUN SUK’s ‘one pick’ by presenting an improved version of himself during the final monthly evaluations to select members for the debut group, becoming the unexpected one.

▶PARK JEONG WOO, the ‘vocal you trust and listen to’, shockingly drops out as soon as he joins the debut group! The rise of KIM YEONGYU, the ‘dark horse’!

PARK JEONG WOO is one of the shiny treasures of ‘YG TREASURE BOX’, known as the ‘vocal you trust and listen to’. PARK JEONG WOO defeated BANG YE DAM on the first monthly evaluations, becoming the ‘unexpected icon’. PARK JEONG WOO started walking the ‘flower road’ after that, successfully becoming part of the debut group.

However, he battled his ‘close friend’ KIM YEON GYU on the ‘1:1 position swap’ mission and lost, despite presenting his soft vocals while performing BLACKPINK’s ‘STAY’. YANG HYUN SUK and the 100 Treasure Makers chose KIM YEON GYU rather than PARK JEONG WOO, which shocked the viewers. While PARK JEONG WOO’s tears after ‘dropping out’ of the debut group as soon as he got in and KIM YEON GYU’s smile crossed after the event, the people are paying keen attention whether PARK JEONG WOO will be able to get himself back together after revealing his determination by stating, “I will go back to the debut group”.

Now it is time for the birth of another unexpected one. Among KIM JUN KYU, MASHIHO, PARK JEONG WOO, BANG YE DAM, SO JUNGHWAN, HARUTO, and HA YOONBIN, PARK JUNG WOO dropped out and KIM YEON GYU joined the group on the 4th episode aired on the 7th, starting a new change in the composition of Treasure 7.

On the 5th episode of ‘YG TREASURE BOX’ to be pre-released on December 14 (Fri) at 10 PM through V LIVE and Never TV, the tense battles between the remaining Treasures including KIM JUN KYU and BANG YE DAM with the rest of the trainees will grab the attention of viewers. As KIM SEUNG HOON has been previewed as the one challenging BANG YE DAM and HARUTO shed tears during the preview, people are paying keen attention on who will become the next unexpected one.

Unlike existing survival programs, ‘YG TREASURE BOX’ is a differentiated survival program to select members for a new boy group of YG to be launched in 2019, by revealing the trainee casting, audition, training system, monthly evaluations, and idol processing progress of YG. The program airs every Friday night at 10 PM through V LIVE and Naver TV.

‘YG TREASURE BOX’ The Ones Who Protect vs The Ones Who Take it, The Fierce Competition Towards the Debut Group